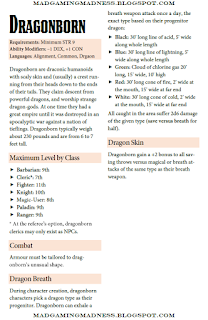 So, one of the many games I've backed on Kickstarter is Old School Essentials , which is a cleaned-up, streamlined, and corrected version of the B/X version of Basic Dungeons & Dragons (Moldvay/Cook) rules. Gavin Norman (who posts as Necrotic Gnome) does an incredible job editing and collating info into a super-easy-to-read format. One of the modifications to the B/X rules introduced in the OSE Advanced Fantasy book is separating race from class. In original B/X, the races are represented as classes, with the idea that, if you're playing an elf, that should be special enough in-and-of-itself. If you allowed non-human races to take classes, then players will play the non-humans because their innate abilities make them better than equal-leveled human characters. Separating race from class, the default introduced in AD&D, caused huge flamewars and continues to do so today. The Advanced Fantasy book has reasonable versions of the races so that, if it's your preferen
Post a Comment
Read more 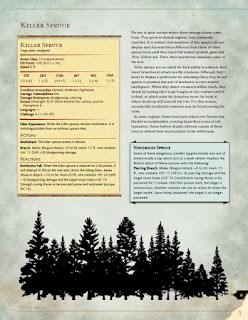 The next monster from Dragon #156's "Not Necessarily the Monstrous Compendium" is the dreaded Killer Spruce, by Hans Persson.   No one is quite certain where these strange plants come from. They grow in distant regions, less commonly travelled. It is evident that members of this species do not display and characteristics different from those of other spruce trees until they reach full mature growth, generally 20 to 30 feet tall. Then, their murderous impulses come to the fore. Killer spruce are so called for their ability to animate their lower branches to attack nearby creatures. Although they seem to display a preference for attacking elves, they do not appear to possess any sort of sentience or even animal intelligence. When they detect creatures within reach, they attack by lashing their large boughs at the creature until it is dead, at which point the branches move the body to where its decay will nourish the tree. For this reason, occasionally incidental trea
Post a Comment
Read more 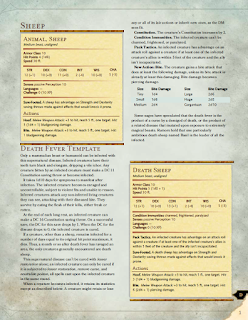 Continuing my attempts to convert joke monsters from the Dragon magazine issue #156 article "Not Necessarily the Monstrous Compendium" to 5th edition stats (and increasing their usability), I present the death sheep. In the original article, these monsters (created by M. W. Rodgers) were basically rabid sheep. EDIT: Greenbriar on The Piazza message boards set me straight on the source of the joke. It's from this Monty Python sketch . I can't believe I forgot about this one! Bad nerd, no cookie! I've given these creatures Pack Tactics to make them a serious threat to even higher-level adventurers. However, it should be noted that this is meant to represent the kind of relentless threat the infected can represent (see, for example, the movie 28 Days Later ). It should not be taken to represent actual intelligent tactics. I was going to start by statting out a regular sheep in 5E terms. As it is, Troll Lord Games has released an OGL sheep in their excellent supplem
Post a Comment
Read more
More posts